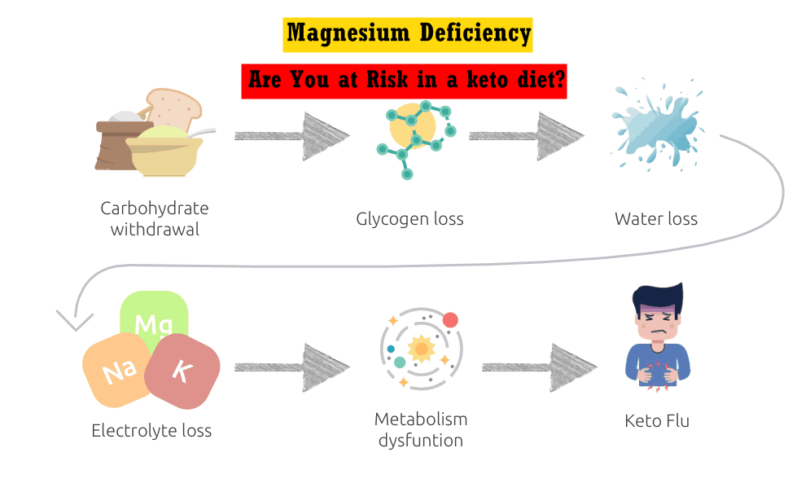 This is the importance of magnesium in keto

Magnesium Deficiency, Are You at Risk in a keto diet? All minerals are vitally important. But when you’re on keto, you could argue that magnesium is one of the most important. So let’s talk about why magnesium is so critical on a ketogenic diet and what it can do for you. I’m Thomas DeLauer with Keto-Mojo and we’re talking minerals today.

The first thing I want to address is ATP adenosine triphosphate. ATP is the energy currency inside your body. So whenever you are creating energy, you’re utilizing ATP. Now when you’re on keto, what happens, is your body goes through gluconeogenesis.

Now gluconeogenesis is where your body takes protein and converts it into glucose. Now, this sounds like a wild thing, but it’s totally normal and totally expected. The thing we have to consider is that gluconeogenesis takes energy, it takes extra ATP, which means we need to produce more ATP.

Well, where magnesium comes in is ATP, although just called ATP, realistically should be called mag ATP. Why, because ATP binds to magnesium to be effective and to actually activate.

So without magnesium, ATP doesn’t work. So when we need more ATP because we’re on keto, we need more magnesium. So if you’re feeling a little bit lethargic or you’re feeling like you’re just not yourself, there’s a good chance it could just be a simple magnesium deficiency that is easily corrected with the right foods or supplementation.

Okay, volatile sulfur compounds, are literally just a reaction of sulfurs and specific foods that come up through your breath. Well, it turns out that magnesium has a reaction with the sulfur compounds that in essence, neutralize them, make it so that your breath doesn’t smell as bad. So if you’re battling keto breath or you’re just battling bad breath in general, magnesium might be a ticket to be able to, I don’t know, not deal with it anymore.

Then we discuss the bathroom, the constipation world. All right, so if you’re doing keto or you’re new to keto, you’ve probably experienced a little bit of constipation. Now it happens generally because when you first go on keto, it’s easy to get a little bit dehydrated. And almost everyone knows that if you’re dehydrated, neh, things don’t move quite as smoothly if you know what I mean. So magnesium helps draw water into the colon, which means it acts as somewhat of a stool softener. So it makes it so everything moves nice and easy.

But additionally, if you lose magnesium when you’re on keto, because you’re losing water, and magnesium is a water-soluble vitamin, so it’s easy to lose it, then you lose the muscle relaxation effect, and maybe hard to connect the dots sometimes, but your intestinal system is a series of muscles. So if they’re not relaxing, then they’re not able to relax and contract and move things along.

So magnesium can help with the right kind of contraction and relaxation for everything to move on through your system so you can get regular again.

And then when you’re doing keto, oh, the cramps, if you’ve ever dealt with cramps when you’re on keto, like you said your muscles after a workout. There’s a very good chance that it is magnesium related. A lot of people turn to potassium first, but in reality, it’s usually a magnesium issue. You see, magnesium has to do with iron transportation. Iron transportation is where we’re basically allowing magnesium and other minerals to get into the right area of the cell, to send the signal to contract and relax the right point in time. Very similar to how we discuss the digestive system. It’s just happening at the musculoskeletal system.

So if the brain is sending a signal for the bicep or the quadriceps to contract, and it’s not really working, because it doesn’t have magnesium, it could just trigger it to cramp up fun fact muscle knots, like when you get a tight knot in your back, all that is, is a piece of a muscle that is contracting and relaxing really rapidly and not letting go.

Okay, it’s not letting go. So it’s just tightening and contracting until it turns into a knot. It’s not like you physically have knotted up the tissue into a knot, it’s just a portion that’s contracting, magnesium can help with that significantly. Now, this is a perfect segue into the next piece which is sleep.

And when we are in the same vein as talking about relaxation and relaxing muscles, we can talk about sleep. You see, magnesium activates the parasympathetic nervous system, which means it gets you out of that fighter flight mode. And when you do keto, or just deliver high-stress life in general, you’re probably sitting in that fighter flight mode all the time.

So your muscles are tense and everything’s tightened up. That also makes it hard to sleep. You may not realize it, but you’re amped up on the inside, even if you’re tired on the outside and you’re not getting a deep sleep that you need. Okay, so magnesium is going to help you with that when you’re on keto, but additionally, it’s going to bind to what is called GABA receptors.

Now GABA is what helps you feel relaxed. Okay, we have GABA, we have glutamate in the brain. And we want to be tilted towards the GABA cycle, but we need magnesium to bind to GABA receptors in order for that system to be turned on.

So in short, if we want our body to kick into the relaxed mode, we want it to kick into, we need magnesium to really turn on that GABA cycle. So there are just a few quick reasons as to why you need magnesium. If you’re doing a ketogenic diet, or if you’re intermittent fasting.